Below is my suggestion for the Audrey Hepburn pilgrimage. Apologies for its poor quality. 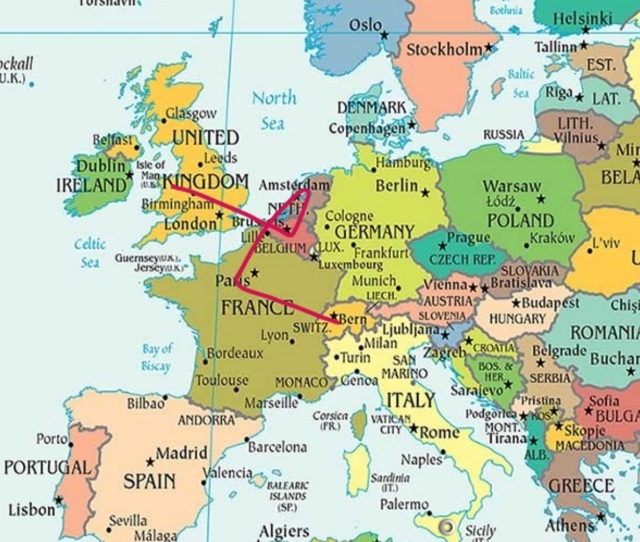 As you can see, the pilgrimage will start in London, where she studied and pursued ballet with a scholarship. The next stop, Belgium, is actually where she was born while the third stop, Amsterdam, was where she continued dancing ballet after she studied in London. Paris, the fourth stop, was where they filmed certain movies like Funny Face, and the last stop, Switzerland, was where she got married, built La Paisible, stayed until she died. It’s actually not the last stop. The last stop would have to be New York (you have to know why), and I think you do not need a map for that. It being the last stop depends on the Marie Antoinette route, actually. It can either be the first or last since I believe Marie Antoinette never went to the New World.

You might have noticed that the route is messy. Shouldn’t it start with Belgium because that’s where she was born? The answer is… it’s not practical. It would be a waste of money to fly to London after Belgium, and then fly back to Belgium, right?

Following the route is not the only thing we have to do during the pilgrimage — we also have to dress like them. Yeah I know it’s a crazy idea, but it sounds fun, well at least for us haha! I can’t wait to see him in 17th century clothes.

Actually, if we really want a complete pilgrimage, we’d have to go to Africa because Audrey spent a lot of time there helping the children. We could include that, or we could also do charity work for Audrey’s foundation (or something else). My friend and I are into that kind of stuff anyway.

As for the Marie Antoinette route, like I said, my friend will be the one making that. But if you’ve been listening during your history classes, you’d probably know how it’ll go.

I was not able to light a candle on Audrey’s 20th death anniversary last Sunday (January 20), which is why I wrote this. I still do not have a solid tradition for her death anniversary, and I really wish I could visit her in Tolochenaz every year. While writing this, I just realised that I sound silly going loca for Audrey. But you know, she’s not just about beauty and elegance. She had a rough life, maybe even more difficult than ours in spite of her being a successful hollywood actress and a daughter of a baroness (read her biography, you’ll learn that she was a real badass). Instead of being cynical, she focused on the good side of people, and I believe everyone should be like that. I hate cliches but this one really sums it all: She’s truly an inspiration.